Ooh – how many there could be… A while ago, I would probably have had a few to roll out, but there was something I realised after I’d released Hope’s Daughter and started getting reviews back. No one loves every book – there will be a whole mix of people from out-and-out fans, through to the people who believe you wrote your book purely to torture them, and then there are a band in the middle, mildly ambivalent. Reading reviews of my own work has made me look at how I review and perhaps even read books now – I focus on the bits I like and down play those I don’t (very different to how I read for my literature courses). There will still be some that you DNF because they are just not for you – others that you read over and over again. And so now I live with that – whether you enjoy a book or detest it – it’s as much down to you as reader, as the book itself. 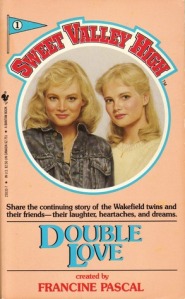 But, there are some books I imagine people would think I should be embarrassed for liking 🙂 How about as a pre-teen having stacks of Sweet Valley High books? Conscientiously lining them up in number order on my book shelves (oh yes, there were loads of them and of course formulaic and cheesy – what more could I ask for) and longing for the ones to fill the gaps in my collection, scouring Christmas Fairs at school for the missing ones, or taking my WHSmith voucher from my birthday and – could it be? – buying one at the full price! I found one a short while ago, and to be honest, I’d struggle to read it now – but it has to say something that the only way I remember how American dress sizes convert to UK is that the twins were described in every book as being ‘a perfect size six’ – which I worked out was an 8 – and still think of it each time I make the conversion. Yes – I know – that’s a bit bonkers.

I’d always read a lot as a child, but in the years between Mallory Towers, Roald Dahl and Joan Aitken, Sweet Valley High dropped in to the gap. Point Horror books also came out when I was 10 / 11 and they were another series of teen-aimed thrillers and horror stories – and I moved on to them. It’s probably where my enthusiasm for twists and turns in stories came from 🙂 I still remember being floored when the ‘baddie’ in The Lifeguard turned out to be the fanciable, kind lifeguard and not his creepier, brooding brother – who would have thought it? In my defence, they were both lifeguards, so I wasn’t that dumb.

I think some of the Point Horror series still float around now – I found one on a bookshelf in a B&B a couple of years ago, and on giving it a whirl found myself caught between dropping into my giddy-teen self, who still hides somewhere deep inside me and (being a bit of a snob) tossing it back on the shelf. I opted for the first and had a nice escapist read – before heading back to my favourite Chaucer (erm, or not).

Any other book-skeletons in the closet?

Twilight will come high on many people’s lists. I’ll come clean – I’ve read them all, and can say that if you gave me the first book to read again, I would still enjoy it for the clutzy relationship bits – the rest of the series less so, because I like a bit of action and surprises, two things SM doesn’t do so well. I also wasn’t keen on some of the later ‘quirks’ of the myths – like imprinting – and quickly grew tired of the love triangle. Don’t set up such a perfect irrevocable love in book 1, to try and make space for someone else in book 2, whilst also having the wise ole vampire make such an arbitrary decision in the first place… Hmmm, was I looking for something realistic in a book about teen vampires – maybe I was barking up the wrong tree, just like poor wee Jacob 🙂

I think I enjoyed Midnight Sun for the same reason I liked Twilight (yes, that’s right, I liked Edward that much, I took the time to go to her website to read his story). It’s the new relationship, most teen-reaslistic bits, that were the best part of the series and I imagine what caught people’s attention so much – the rest of the story was incidental to the romance bit. (I can say that I really lost the will to live with Breaking Dawn and was not a fan of the Host – I think that is more problematic in terms of negative m/f relationships… If you tell me that you love(d) those – I’ll try not to make you feel embarrassed 😉

I don’t think anyone should ever really be ashamed of a book they’ve enjoyed – I also think books like Twilight are ‘of an age’ – like my Sweet Valley High books – and I can see how for people at certain ages (or points in their life) with a shared love of a book, film, etc. can become a mini-obsession – hell, there’s a bit of Bella in everyone. Too much of anything is a wee bit unhealthy, and I think that’s what people see more when they look at the Twilight books now, instead of just reading it for what it is – who hasn’t been self-concious, stuck someone on a pedestal, obsessed a bit and done something stupid? Bella takes it to extremes, but I think part of this is down to the first person narration – there’s no other filter to how Bella sees the world and makes her decisions – no one comes off well if you see everything about them from the inside out. (Try American Psycho if you think Bella’s self-obsessed!) There’s also the element – if you agree with the brain boffins – that we’re pre-disposed to erratic, dangerous behaviour in our teens, as well as focusing in (or obsessing) on certain things, as our brains go through the most rapid period of development since you were a toddler – spend some time with both groups and see if you think it’s true.

Sometimes it’s the hype that makes you feel guilty for liking something – especially when the hype goes bad, as it did for Twilight when people in the wider world really started taking notice of it. I try to ignore the hype now, and go with what I want – I missed the first few years of Harry Potter because the hype around the films and comparison to LotR irritated me. That was a #fail. With Fifty Shades fever, I wasn’t too high-brow to not give it a try – but thank the lord for the preview on Kindle – four pages in and I knew that no matter what lay in store, I couldn’t stomach a book full of that writing style. Alas, I’ll never know Mr Gray.

Sometimes just reading something, whether it’s fluff and fun or high-brow and literary doesn’t matter – if you enjoy it, you enjoy it – end of story. I also think that initial first feeling you get from reading a book – perhaps something like Twilight – is the genuine one: without any second-guessing, psychoanlysis of the characters and in-depth reviews about misogyny in contemporary teen literature – you can leave that to your literature essays and just take away whether it made you feel something and put a smile on your face (or even a frown – at least it did something!)

Soooo…am I now embarrassed to say I liked a book? Not really. I think because I can quantify what I like, whilst seeing why someone else might not – that’s enough for me. I think I’ll be giving a Mills and Boon book a go now, then maybe an Andy McNab…Can’t knock it till you’ve tried it 😉